Sage, for one, will be ready for tomorrow's soccer game. She insisted on going to bed in her uniform, including the shin-guards. 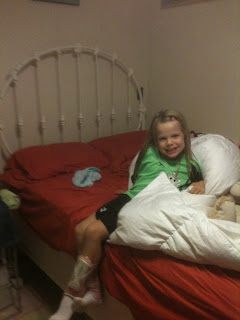 This morning we saw a huge crane outside of a McDonald's. Evan speculated that one of the customers had gotten so fat that he had no other way of leaving.
Posted by Eric at 6:14 PM No comments:

This weekend Evan's soccer team had a tournament in Lawrence, where they played various hand-picked teams with pretentious-sounding names. I'm not sure how Kaw Valley Force Internacional felt about having to face a team called the Purple People Eaters. Anyway, here are the Eaters during the tense, tense moments just before their game against KVSA Club Select:

how does she do it?

it may be time to reconsider the name of this newspaper 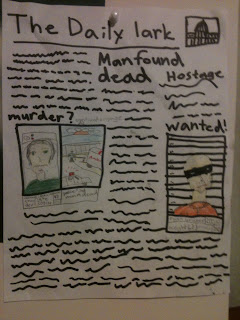 Today, on the ride home, Evan announced the advent of "Karma Comics," which he's collaborating on with some school friends. So far they've come up with five characters: "Pizza Man, Crazy Guy, Robber, Evil Wizard, and Guy with a Big Stupid Hat." It sounds as though these characters all do bad things to one another, but then suffer for it. Thus, Karma Comics.

Also on the ride home, he came up with a great idea for a new reality-TV show: "Awesome Security Systems." I told him it sounds perfect except for the acronym.
Posted by Eric at 4:03 PM No comments:

Sage has decided she's going to be either a fairy or a ninja for Halloween. "And the Halloween piano recital is coming up," she says. "And if I'm a fairy, I'm going to play a princess song for the recital. And if I'm a ninja, I don't know what I'm going to play."
Posted by Eric at 7:32 PM No comments:

you're walkin' on the fightin' side of Evan

A student handed in a personal essay titled "Legos: the Root of All Evil." I showed it to Sonja, who said, "Don't tell Evan," but Evan overheard that and so we had to tell him. Afterwards he became kind of obsessed with it. Why in the world would someone write that about Legos? What a moron. I was going to give him an F, wasn't I?

Eric: "Evan, I haven't even read the essay yet. I can promise you that it's not really about how awful Legos are?"

Eric: "I just know. The assignment was to write about a time when you did something you knew was wrong. This student probably stole a friend's Legos, or a friend stole his, or something like that."

Evan: "Legos: the Schmoot of All Schmeevil. What a jerk. You need to give him an F."

I just came into the TV room and found Sonja and Sage watching a Bollywood movie. The central characters, a young king and queen, were talking in a bedroom. Sonja said that Sage was really into the movie, despite the fact that it wasn't in English. I asked if all the content was going to be, ahem, appropriate. Sonja said, "Oh yeah. It's an Indian movie. They don't even kiss." Then Sage said, "Yeah, a couple of people died in a war, but otherwise it's appropriate."
Posted by Eric at 4:55 PM No comments: